What makes us think “Hello” is a love song?

Adele has made a sensational return to the charts with the single “Hello”. It has all the hallmarks of her best music: a  restrained backing track, an orchestral feel at the right moment, her voice that goes from cool and controlled in the verse to soaringly high in the chorus – and her trademark mini-yodel (a quick slip to a falsetto – more about that in How to sing like Adele).

But a thought struck me quite quickly: is this actually a love song in the tradition meaning of the word? The video would let us believe that, as it features a guy. But if you check the words, there is no specific indication that it is a romantic song as such. Look at lines such as,

Hello? It’s me.
I was wondering if after all these years you’d like to meet.
To go over, everything.
They say that time’s supposed to heal you but I ain’t done much healing

If you think about it, this could be a song addressed to a parent, a brother or sister or even – as one reviewer claims – about her younger self.

Romantic love song or something else? 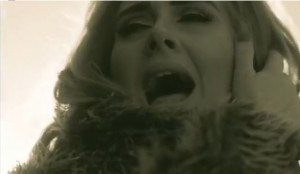 The second question that immediately spring to mind is, “what difference does it make?” Would it make the song better or deeper if it was a romantic love song? Or would it not be richer if we look for other meanings?

At the end of the day, of course, songs are not always entirely autobiographical. If a singer had to have lived all the love stories that they sing about at an average show, where would they find the time to rehearse, write and sing? What’s more, many songs are written by people other than the singers themselves. The singers are, to a large degree, acting out someone else’s story. To do that, they often have to assimilate it and make it their song.

Ultimately, songs reach us when they resonate with us, with our own stories. So forget the video to Adele’s “Hello” and ask yourself: what is the first face that springs to mind when you hear the song on its own stripped of videos and images?

See? Deep down, it’s your song after all.

“Hello” was written by Adele and Greg Kurstin, who is also credited

with most of the instruments on the recording.