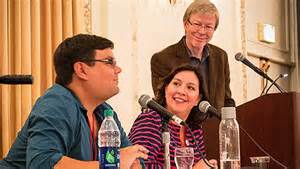 I have to say I love this. Someone compiled all the various language versions of the Disney song “Frozen” into one track. It’s a fun idea, and it also shows up something very interesting. If you close your eyes, it’s sometimes impossible to tell when you go from one language to another. The vocal casting for the movie is remarkable, as the 25 singers all sing in a very similar style. So the viewers are really catching the very same movie in each language. there are even different versions for French Canada and France, as well as Dutch and Flemish (which are very close). In many ways, this is the standard musical comedy style these days, with lots of dynamics in the voice and a very wide range.

‘Let it Go’ went on to receive the Academy Award for best song the year it was released. The ‘Avenue Q’ songwriting duo Robert Lopez and Kristen Anderson-Lopez had been asked to write for the film. The way they saw the character of Elsa was different from the way the scriptwriters had imagined. The songwriters saw her as a more complex and vulnerable character. So ‘Let It Go’ became the theme her character was based on. Elsa was changed from an out-and-out villain and the script eventually turned into one of the most successful animated films ever produced.

Writers of “Let it Go” from Frozen

Kristen Anderson-Lopez is an American actress and songwriter. Together with her husband Robert Lopez and Henry Jackman, she wrote and produced music for the successful 2011 Disney film “Winnie the Pooh”, for which they were nominated for an Annie Award for Best Music in a Feature Production. Anderson-Lopez also provided the voice of Kanga in the film.

Additionally, she then went on to wrote songs for a Walt Disney World production of “Finding Nemo – The Musical.” She and her husband eventually won an Oscar for “Let it Go” at the 86th Academy Awards on March 2, 2014.

All the language versions of “Let it Go”