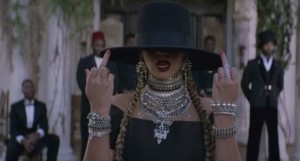 The video for Beyoncé‘s “Formation” video has dropped, and is the subject of a little misunderstanding. Within a day or two of the clip hitting the networks, two American film-makers, Chris Black and Abteen Bagheri, were on social networks claiming it used large extracts of their documentary on the New Orleans hip-hop scene called “That B.E.A.T.”

They had a point; it does. The thing is, Beyoncé’s team had contacted the producers and paid for the extracts. So it would have been more elegant on their part to check this before getting so indignant.

In an e-mail to The Fadar website, Black wrote this about the issue: “I love Beyoncé. I still think she’s dope and I have no ill will or feelings towards her or anybody but at the end of the day we have to respect other filmmakers who are working just as hard… Why use the footage from the doc we did? She has a larger budget than we did and they gave no credit to the filmmakers. If I hadn’t said anything about this would you have known where it came from?”

The singer has asked that the video for Beyoncé “Formation” remain unlisted. I’ve seen it on YouTube, but will direct you to her website if you want to watch it. It’s not impossible to respect an artist’s wishes!

That B.E.A.T. from Abteen Bagheri on Vimeo.